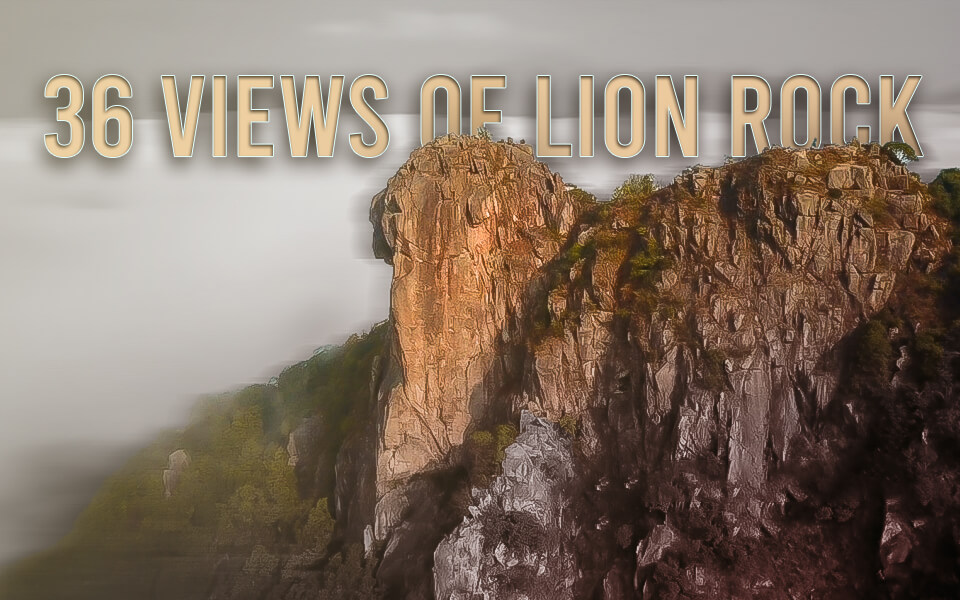 Thirteen years ago, Frenchman Romain Jacquet-Lar`egze had an idea for the Lion Rock series. The first introduction came from his girlfriend, now his wife, who told him about the mountain. Lion Rock was his first hike in Hong Kong. The longer he stayed the more he realized what the spirit of this mountain meant to the people living in Hong Kong.

Its visual is iconic, especially when seen from the point of view where it does look like a lion. Mona Chu provides a background of the name, writing in the book’s introduction that accompanies the Blue Lotus Gallery exhibition. This lion rock mountain was popularized in the year 1973. It is the time when RTHK created ‘Below The Lion Rock’, a TV series about the grassroots of the people living in Wang Tau Hom.

She writes, “Then came the 2002 budget address. Chief Financial Secretary Anthony Leung quoted the lyrics from the theme song, urging Hong Kong people to ‘live the Lion Rock beliefs’ and set aside differences in the face of a dire economic crisis. The name has since stuck.”

The photo shoot project began in Japan. Romain was a design intern there before arriving in Hong Kong. He saw an exhibition of the 1830s woodblock print series, Thirty-six Views of Mount Fuji by Hokusai Katsushika. Hokusai’s prints made Mount Fuji an important part of Japanese identity.

It became so popular that it led to the global export of these inexpensive prints, an icon of Japan to the world. Many legendary painters such as Pablo Picasso and Claude Monet got inspired and influenced by it.

As his idea matured, Romain recognized that Lion Rock resembles Mount Fuji, a landmark that represents both Hong Kong and its people. It sparked the idea that maybe this series could boost Lion Rock to a status like Mount Fuji and become iconic not just in Hong Kong but around the globe. However, there were some compositional challenges. Hokusai’s art was not restricted by reality.

Lion Rock also represents the spirit of Hong Kong. Time will tell if Romain’s series pushed aloft the mountain to the iconic status of Mount Fuji or the Eiffel Tower. But it is certainly as ambitious as Hokusai’s and Rivi`ere’s series. This exhibition was aimed to represent a new perspective and a reminder to Hong Kong citizens.