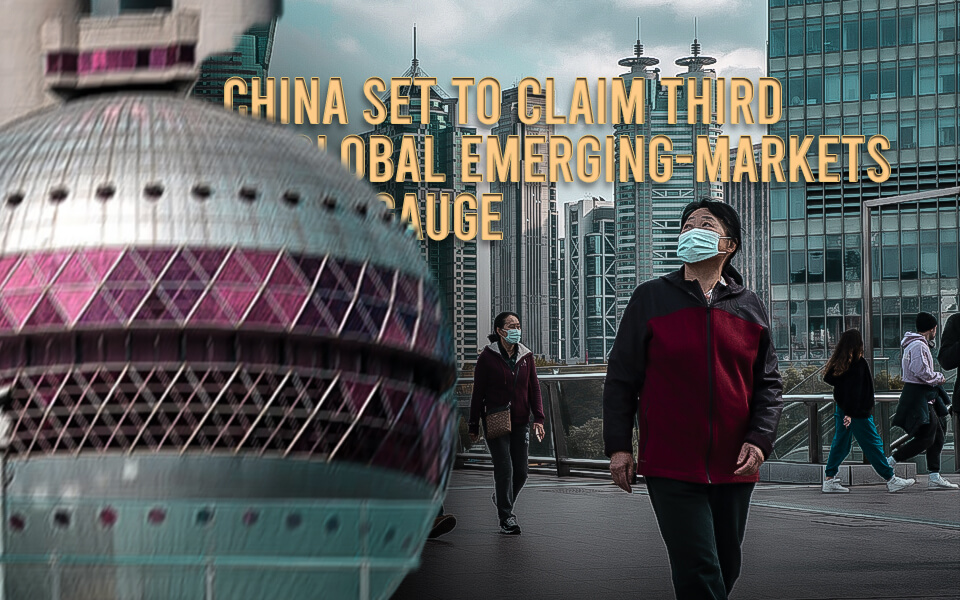 Following a dramatic outperformance prompted by a relaxing of strict Covid controls and a shift to pro-growth policies, China’s shares are poised to regain a one-third weighting in a key emerging-markets index.

Since October, when they made up 26.8% of the MSCI Emerging Markets Index, stocks listed in the Chinese mainland and Hong Kong now make up 32.2% of that index. Since then, the MSCI China Index has increased by 46% compared to the EM gauge’s increase of 16%.

Nearly all of the issues that were weighing on China’s outlook have been addressed by President Xi Jinping. He removed Covid-19 limits, put in place several policies to promote the real estate industry, made headway in resolving a dispute with the US over an audit, and relaxed regulations on private businesses.

China’s superior performance highlights the country’s growing appeal as a worldwide portfolio diversifier as recession fears grow in Western economies. According to figures gathered by Bloomberg, its GDP will increase by 4.5% this year, outpacing the US’s modest expansion and the Eurozone’s possible collapse.

According to Gary Dugan, CEO of the Global CIO Office, China’s recovery is taking shape “at the same time that global investors are concerned about the prognosis for the developed markets.” “Its favorable characteristics, independent of a thriving global economy, offer diversification against risk in established markets.”

The determination of investors who chose to leave the EM anchor last year for other countries, notably India, amid unrelenting selling, will also be tested by China’s growing influence. In the wake of Xi’s decision to appoint loyalists to important positions, the MSCI China Index plunged to an 11-year low in October.

The likelihood that Asian and emerging market equities would outperform global peers in 2023 is increased by China’s lower-than-average valuations and low bar for relative economic outperformance. About 2% separates the MSCI Asia Pacific Index from a bull market.

China went from being “a stock market darling, to uninvestable, and back to at least attractive,” according to Dugan, who also noted that the perception of China among international portfolio managers seemed to have completed a full circle.

According to Morgan Stanley strategists, Chinese stocks will receive a more significant allocation and outperform international peers this year. They contend that the quicker-than-anticipated reopening and more apparent indications from policymakers that the economy is a priority have strengthened the market mood.

Increased allocation to China should be made in light of “signs of earlier macro bottoming out post Covid,” “committed stimulus policy,” “further currency strengthening,” and “near-term stabilization of geopolitical uncertainty,” according to a note published on Thursday by strategists Laura Wang and Jonathan Garner.

Before being overweight on China in early December, the US bank’s analysts had predicted correctly escalating downturns in the emerging and Chinese markets.